So I went to my office after returning from the Central States Communication Association conference (awesome time, BTW!), and found THIS on my desk!: 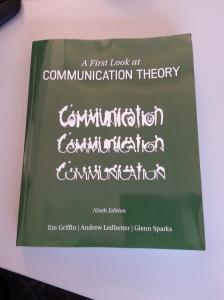 Seeing this book in print, with my name on the cover, was a meaningful moment in my career. When I was a junior at Wheaton College, I took Em Griffin’s interpersonal communication course. That class whetted my appetite for more, so in the spring semester I took his class on persuasion–which was intriguing, applicable, and engaging.

Then I enrolled in Em’s communication theory course. I was so excited that I bought the theory book before I left campus for the summer. I’d read half of it by the time I returned in the fall. The subject matter fascinated me–and around that time, I knew that I wanted to be a college professor. Specifically, a professor of communication.

Years later, when Em asked me to join him as a co-author on the A First Look textbook–the textbook that played a potent role in leading me to my career–I felt honored beyond words (and for us communication scholars, that’s saying something…) And let me just say that Em Griffin and Glenn Sparks are outstanding collaborators. They’re also very good writers–for example, if you want an insightful and entertaining read, check out “Rolling in Dough,” Glenn’s memoir on growing up in a doughnut shop. I’ve learned so much about the writing process from both of these outstanding colleagues and friends.

So that’s some of the story behind the book–what about the book itself?

Even though a couple of new names appear on the front, the spirit and style of the book remains the same. To continue the book’s legacy of engaging students with communication theory, we’ve made several additions and changes in response to instructor feedback and our own close reading of the book. Some of the changes that excite me most include:

In the end, I hope these additions and changes help students not only learn communication theory, but become passionate about it. That’s one of the things I appreciate most about the text’s earlier editions–Em always presents communication as an inherently fascinating object of study. And not only fascinating, but useful in everyday life. I hope this new edition of the book inspires students to communicate excellently in both their personal and professional lives.